The Temple of the Peacock Spirit

February 29, 2020
Our Heroes find their way to the Temple of the Peacock Spirit, a complex high in the northern Varisian mountains where an ancient cult from the Runelord's time is rumored to be found.  They travel by way of the Viridian Transendence, a ritual that involves singing and dancing. Yes, even Antwon.  And of course Nelson joined in.  That should not have been a question I wouldn't think. Most of the inhabitants just waved The Party through, saying something about "He wants to meet with you."  There was almost a fight with some Wereboars, but a quick shiv to the leader's kidney sorted shit out right quick.  Then a long bridge, and a nice cathedral where the party cleaned out some haunted paintings and ALMOST kept from pissing everyone off just long enough to get some lunch. Maybe next time.  I hear they have a nice buffet. Then downstairs - some demons, and some other strange dudes, and a weird feathery freak who spoke of himself in third person and called himsel
Post a Comment
Read more

February 29, 2020
The party left the WorldWound and went on some adventures.  There was Korvosa and Jorgenfist and it was quite exciting. There, now I think we're all caught up.  Everyone's 10th level and 3rd Mythic Tier.
Post a Comment
Read more

A scrap of a note 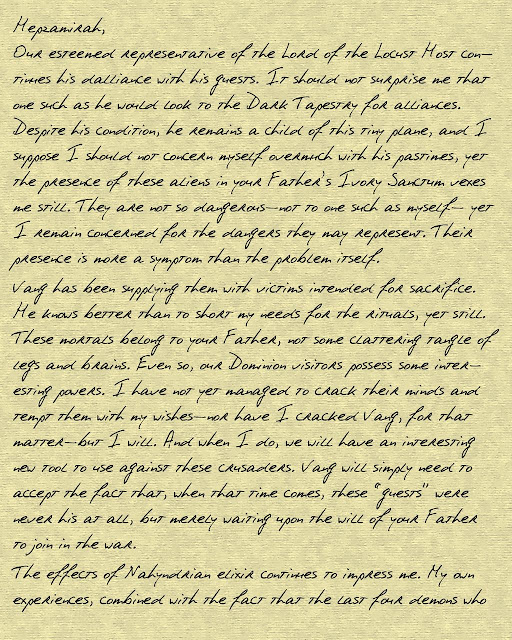 Here is a note, unfinished, found in the chambers that most likely belonged to Jerribeth the Glabrezu Demon, 'sister' to Arueshalae the succubus. No, I don't know what 'sister' means in the context of demons.  Arueshalae isn't talking about it, either, and seems ashamed of the entire affair.
2 comments
Read more

And some time passes, in the World Wound

January 23, 2020
Dear Reader, I must apologize for the interruption of narration.  YHN had a string of bad fortune; his second-best pen ran out of ink, and several of the pixels in his transcription machine's video device suddenly and without warning became trapezoidal instead of the expected square shapes, which completely ruined his viewing experience. Our Heroes dicked around in the World Wound for a couple of weeks, is the long and the short of it, meeting druids and not one but two purveyors of used organs.  They fought demons and the undead, explored a tomb of Antwon's lost familial line, and even, dare I say, learned an important lesson about trust and love. Maybe not that last thing so much, now that I review my notes. They freed the succubus Arueshalae from the stand-off she was facing with a Hag Assassin and Friends (coming soon to Disney Plus!) and assaulted the Ivory Sanctum, culminating in an Epic Battle with Xanthir Vang - a man made out of maggots and spite (Maggots and Spi
Post a Comment
Read more

November 21, 2019
One item found is the Sword of Valor - a banner, which... well, but let us let Irabeth Tirablade describe it in her own words: The Inheritor herself carried this crimson banner into battle during the Shining Crusade. An army commander who carries the Sword of Valor increases the DV and OM of her army by 4 against armies of undead or evil outsiders. Yet the Sword of Valor’s greatest power lies not in offense but in defense. Mounted firmly upon an interior wall in a visible, public place, the Sword of Valor creates a 10-mile-radius area that bars demons and those who worship demons from using teleportation spells and effects and imparts on such creatures a –4 penalty to Armor Class and on all saving throws. Once per month while the banner is mounted on a wall, a worshiper of Iomedae within 30 feet of the banner can use it to summon a planetar to protect the banner and its surroundings for 1 day. Any nonevil creature that sleeps within a 1-mile radius becomes immune to fear effects from
Post a Comment
Read more

November 21, 2019
We rejoin Our Party in the caverns under Drezen, which are a horrible place.  A whispering maddening susurration of half-heard voices distracts The Heroes, making it difficult to concentrate, and a pervasive evil lingers on the soul like smoke on the clothes after a bonfire.  The Party is weary and has used a fair portion of their magics and their Mythical powers, and considers resting in the blessed cell, when Antwon is buffeted by a... a soul, it seems.  Antwon feels the last thought of one of the Crusaders: "I thought I could forget it, forget the murder, but now Sarenrae will judge me, at last.  Forgive me, Maria." The Army outside is beginning to die, beginning to succumb to the ravages of the Abyssally-charged disease.  The Party decides to press on, except for Kand, who takes some time to sort and classify his new library of planar and demonic knowledge. In one of the dorm rooms near the cell block we find a secret door, which leads to a platform overlooking a gian
Post a Comment
Read more

November 16, 2019
The seven adventurers: Antwon the Cavalier, Kand the Wizard, Torvan the rogue, and Vig the Ninja/Paladin, with their friend Kendra, and new friends Jestak the Barbarian and Joran the Wizard, descend into the tunnels carved underneath the Citadel Drezen.  Joran explains that while the stairs had been dug out and plans found for caverns and mines, the crusaders never got around to completing the lower levels of the Citadel, but the demons with their cheap labor were able to carve an intricate series of chambers, used for nefarious purposes. One of those nefarious purposes was the imprisonment and torture of various Crusaders; the stairs lead down into such chambers.  In the basement an oppressive feeling of chaos and evil suffuses and surrounds Our Heroes - it will be harder to cast spells of goodness and order here.  There is a low susurration of maddening whispers, too low to make out details but enough to distract The Heroes from their task, and to sap a certain measure of their foc
Post a Comment
Read more
More posts